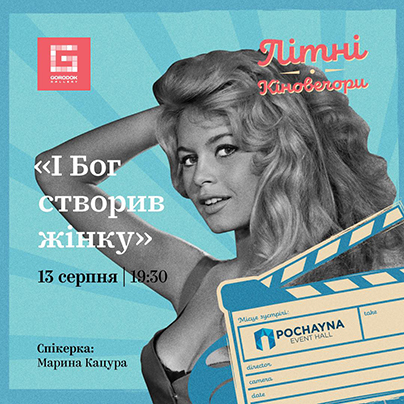 We continue to entertain all movie lovers with a new format of leisure.

We invite you to an atmospheric movie night and viewing of “And God Created Woman” (1956) on the big screen!

We are preparing for you:

Juliette, a young seductress, works in a newspaper shop and has a well-deserved reputation as a lecherous girl. Juliette loves the sea, the sun, the hot sand, music, food and men. Just by her immodest appearance, this sorceress, a former orphanage girl, provokes the men of the town to frivolous thoughts and reckless deeds. So when she faces the real threat of returning to the hated orphanage, her rich suitor, Eric, comes up with the cynical idea of immediately marrying Juliette off so that he can continue to enjoy her goodwill. This idea requires a man who would give up his freedom to keep a girl with a “troubled reputation” free. Such a “madman” would be Michel – a guy who is honest and secretly in love with the charming “princess” of the town. That’s just when the shocking wedding will take place? It remains to be seen which of all her men will choose the unpredictable heroine.

And where these intertwined relationships will lead…

We invite all supporters of French cinema and Brigitte Bardot to watch. We are sure that you will love it!

This film has an age restriction of 16+.